Magtech/CBC M193 is a clone load of the military's 5.56mm NATO ammunition. This load is loaded to Military specifications at the CBC Brazilian facility. This particular load uses a 55 grain Full Metal Jacket bullet. The finished rounds consist of sealed primers which is ideal for long term storage and moisture protection.

Note:
This item is manufactured in CBC factories and imported by MagTech. The ammo is brand new, brass cased, boxer primed, non-corrosive and re-loadable. It is made to military specifications which require the cases to be annealed. Unlike civilian production ammo, the military requires to see evidence of annealing on the round itself. This is why the cases will appear to be discolored. This is done on purpose in order to meet the military requirement for overall strength and durability of the finished round. 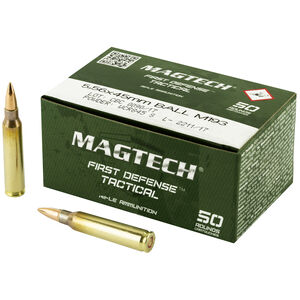