CMMG's Banshee series has been a crowd favorite since it first released, and the 9mm Banshee Mk9 is sure to follow that trend. This series uses CMMG's Mk9 lower receiver, which utilizes 9mm Colt SMG magazines. It uses the Radial Delayed Blowback system that was originally designed for the .45 ACP MkG platform. This system delivers a softer recoil impulse and reduced weight compared to more traditional straight blowback systems. The threaded muzzle comes with a Zeroed muzzle break to reduce recoil, making follow up shots even easier. Each pistol also comes standard with a highly durable Cerakote finish to better withstand the elements. Additionally, you get a whole suite of CMMG's Zeroed accessories such as an ambidextrous safety selector, ambi magazine catch, and ambidextrous charging handle for easier one-handed operation. Also, the CMMG EML4 handguard features M-LOK slots at the 3, 6, and 9 o'clock positions and Picatinny rail slots. This allows the end user to easily attach sights, lights, lasers, and more. The CMMG Banshee Mk9 is an ultra-fun and extremely compact package that is sure to be enjoyed by anyone who gets behind one!

Note: Here is the NRA's interpretation of the latest ATF letter regarding the use and legality of pistol braces.
NRA Interpretation of Latest ATF Letter
PURCHASING A FIREARM ONLINE
Buying a Firearm Online is Easy! Buying Firearms on the Internet 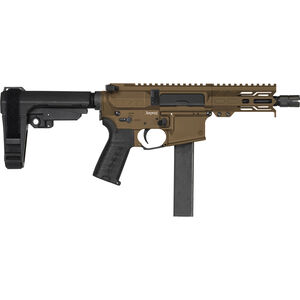