Our Low Price $54.02
Share
Send to Friend
Share Your List
Wishlist link has been copied
Brand: Swift Bullet Company
MFR #: 10110
UPC: 713351101103
Item #: 51359
Description
For more than three decades Swift has been producing top quality ammunition and ammo components for precision shooters and hunters world wide.
The Scirocco II is a copper jacketed boat tail design with a bonded core and ballistic tip. Engineered for long range efficiency, the Scirocco II and its signature black tip are easily recognized. Known for superb accuracy it carries velocity and energy better than any other bullet in its class. The sleek design with a high ballistic coefficient gives it the flattest trajectory possible making it an excellent choice for long range competition or hunting wary hard to reach game. Its polymer ballistic tip produces positive controlled expansion at the slowest velocities, while maintaining high weight retention for maximum knock down power even at close range. No other round can produce the range and terminal ballistics of the Scirocco II. Make sure you have Swift Big Game Scirocco in your hunting pack this season! 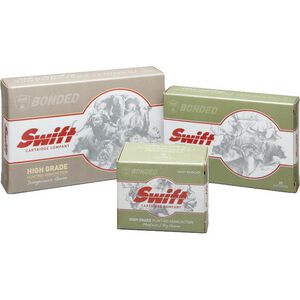