How to Pick Your First Shotgun 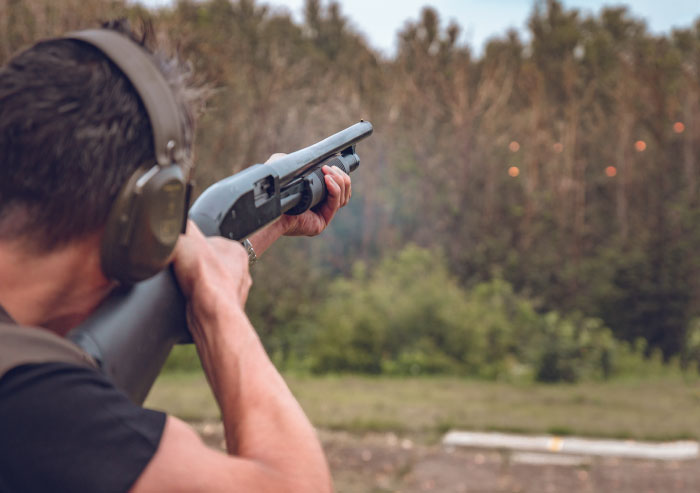 Shotguns are incredibly versatile firearms that can be used for many different purposes. They excel at hunting and sport shooting, and can even be used for self-defense.

Whether you’re hunting small or large game, shotguns have always been a great choice. With so many different options in ammunition, shotguns are versatile tools for hunting. If you plan on hunting with your shotgun, you’ll want to have a longer barrel length to help control the spread of pellets.

This becomes especially important at longer ranges. Break-open and pump-action shotguns are two great options for hunting because of their reliability and simplicity. While the speed of a semi-automatic shotgun is often preferred for waterfowl. When walking around the woods, it helps to have a firearm that can withstand dirt and water and still function. 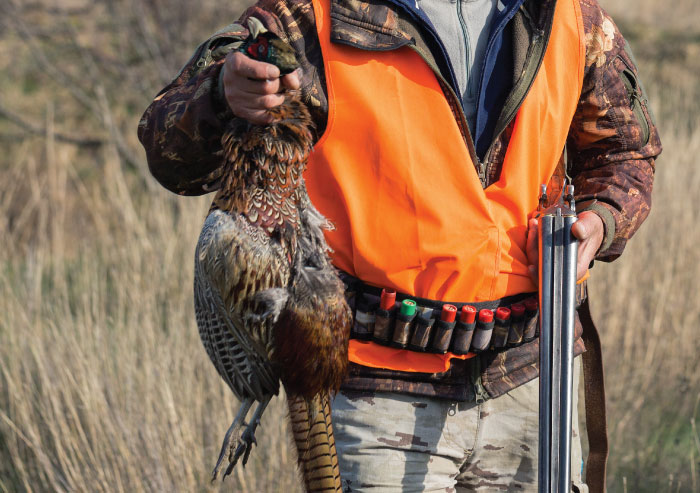 There are many different kinds of sport-shooting competitions for all types of enthusiasts. Along with the traditional trap and skeet shooting, there are 3-Gun competitions as well. If you plan to use your shotgun for competition shooting, take a look at the types of shotguns some of the pros are using for that sport.

You may not need their exact model, but getting a feel for the platform will help with your decision. Most shooters use an over/under shotgun for things like skeet shooting, while semi-automatic shotguns are popular for 3-Gun competitions. 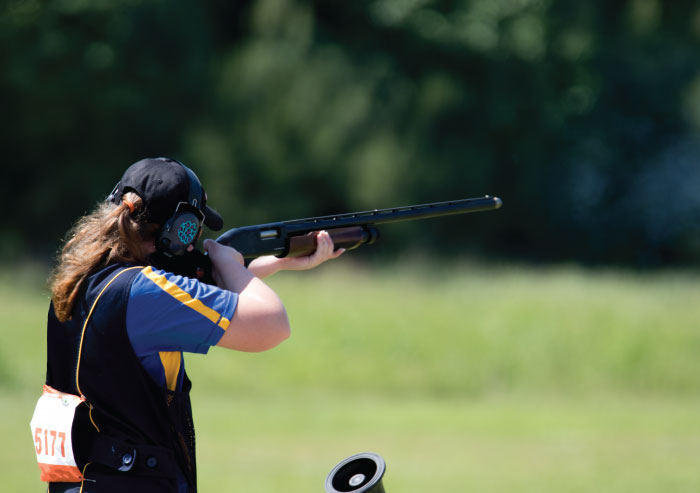 If you are looking at a shotgun for personal defense, you’ll want to consider something with an increased magazine capacity. Having some spare ammunition is an important asset when your life is on the line.

Pump-action and semi-automatic shotguns are great for self-defense because they utilize magazine tubes for increased capacity and have a fast firing rate for follow-up shots.

(Not sure what we mean when we say “action?” Check out this dictionary of firearm terms.) 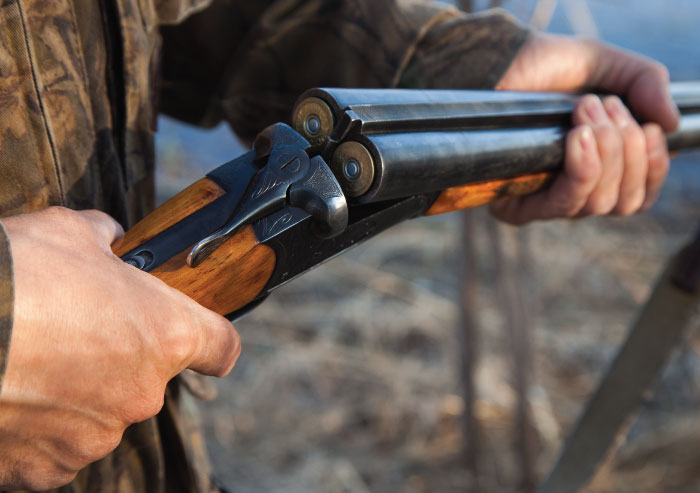 One of the most iconic firearms is the classic double-barrel shotgun. These have been used for hunting and defensive use for over a century. They are incredibly simple to operate but lack the capacity available in pump and semi-auto shotguns. Shooters just press a lever to release a latch that allows the shotgun to “break open” and reveal the chambers. Most models have an ejector to automatically extract empty shells when opened.

There are both exposed and shrouded-hammer variants, as well as versions with both single and double triggers. (Having a shrouded hammer means that the firearm is fired by a hammer, but that hammer can’t be operated manually like with an exposed hammer.)

Some double-barrel shotguns have one barrel on top of the other, these are referred to as over/under shotguns. Others have barrels that are on the left and right of each other and are called side-by-side shotguns. There are also break-open shotguns that only have a single barrel and hold one round of ammunition. 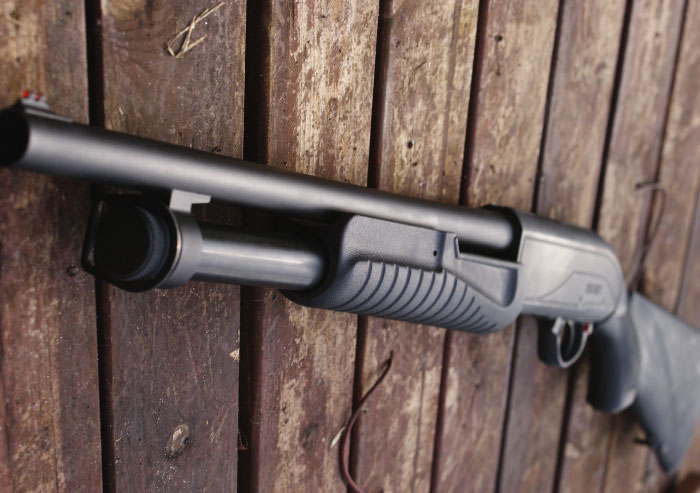 Pump-action shotguns are probably the most popular type of shotgun in the United States. The iconic sound of the pump being cycled appears in tons of movies and TV shows. These shotguns are incredibly reliable, barring user error, and offer a higher capacity than a break-open shotgun.

After loading shells into the magazine tube, chambering a round is as simple as pulling back the forend “pump” section and pushing it back forward. This is a fairly reliable system, with most malfunctions caused by what’s call “short stroking” where the user doesn’t fully pull the pump back or completely push it back forward.

Most pump-action shotguns feature manual safeties that lock the trigger when engaged, and some utilize removable box magazines. 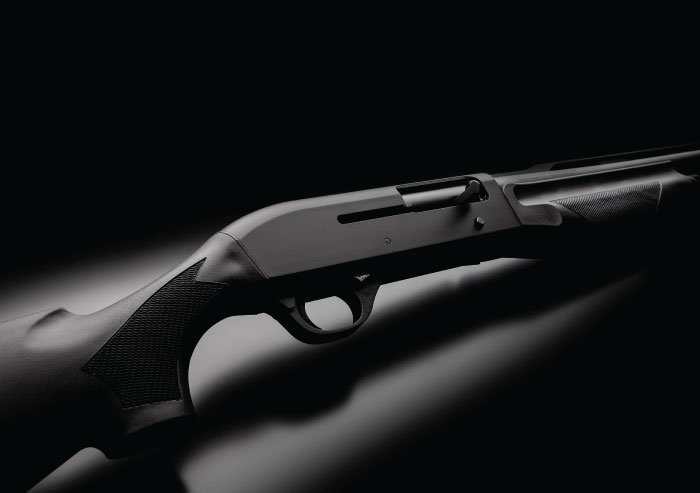 Semi-automatic shotguns are growing in popularity due to modern improvements in reliability. In the past, and in some cases still today, these shotguns would have issues cycling ammunition. This is because of the wide range in the intensity of shotgun loads.

Some have less powder and wouldn’t fully cycle the bolt, some have too much and would beat the firearm up. The important thing with semi-automatic shotguns is to test them with different ammunition and find the options that work the best.

Semi-auto shotguns feed shells similarly to pump-actions, but instead of manually cycling the bolt with the pump, it is cycled automatically by the pressure from the fired round. They hold the same amount of ammunition as pumps and store ammunition in either a magazine tube or a removable box magazine.

However, they have a classic look and feel that many shooters enjoy. Most lever-action shotguns will store ammunition in a tube magazine that runs underneath the barrel and chambering a round is done by pushing a lever under the grip down and pulling it back up. 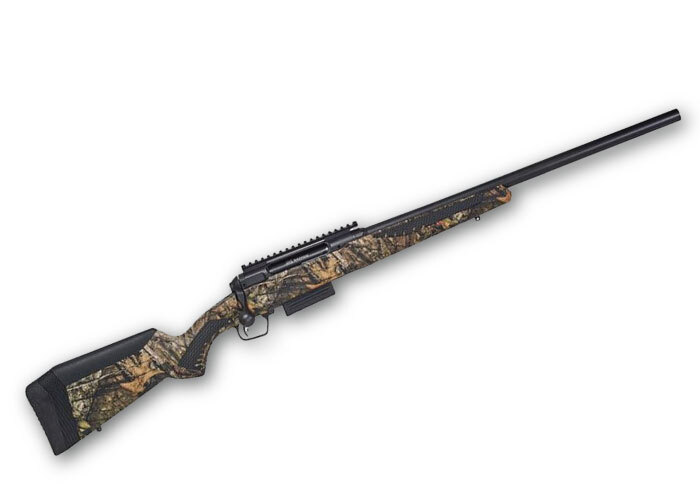 Bolt-action shotguns are intended for firing slugs at longer ranges. These shotguns usually feature a removable box magazine that holds a couple of extra shells, and the firearm is loaded by pulling the bolt knob back to eject, then pushing it forward to chamber.

Many of these shotguns will feature an attachment point for a scope or optic, because they are intended for use at longer ranges and to shoot a single projectile. Further, some bolt-action shotguns will have a rifled barrel to create spin on the slug for further accuracy. 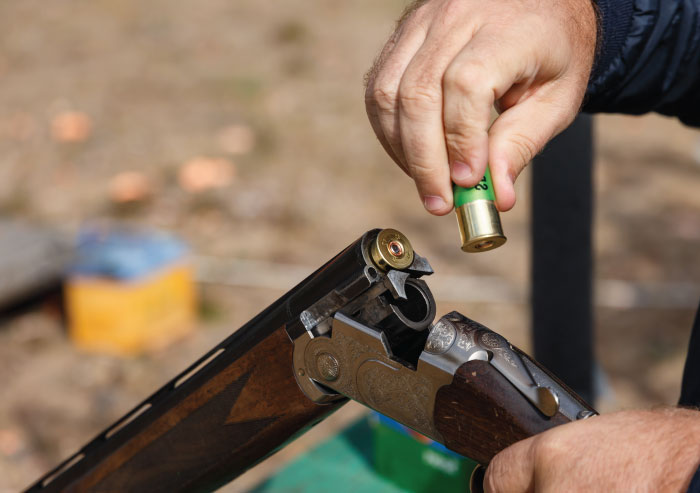 Once you have selected the type of action you would like for your firearm, it’s time to select a caliber. This is described a “gauge” when discussing shotguns and their ammunition. As gauge goes down, the bore of the shotgun gets larger.

The recoil is something most shooters can handle, especially after practice, but if you’re recoil-shy, then you may want to select something lighter.

The shell has a smaller circumference so it holds less powder and shot than a 12-gauge shell. Some 20-gauge shotguns are also lighter and smaller, making them easier to handle for some shooters.

.410 Bore is the smallest commonly used shotgun caliber. It has the lightest recoil, but also the least power. A .410 makes a great youth shotgun for educating kids. A .410 shotgun can even be used for small-game hunting and for dispatching unwanted pests outdoors.

There are many other, less popular shotgun chamberings, including 10 gauge, 16 gauge and 28 gauge. Ammunition is available, but it is far less common and you may not be able to find a specific load you like. These gauges are primarily for handloaders who like to work up their own ammunition.

After deciding on a caliber, it’s time to pick a barrel length. This will be primarily based on your intended use. If the shotgun is going to be used to bird hunt, you will want a longer barrel length, perhaps out to 30-32 inches.

If the shotgun is more for defensive use, 18.5-20 inches is probably better. A longer barrel is going to add on more weight, and will tighten the spread of pellets. Barrel length will also affect the balance and handling of the shotgun.

A longer barrel will keep moving easier as you lead a target, such as a flying bird; a shorter barrel is quicker to maneuver, making those quicker shots easier.

There are so many different barrel lengths and personal preferences, it is best to do some research on barrel length for your desired use, as well as go see how they feel at the store, and then plan your purchase from there. 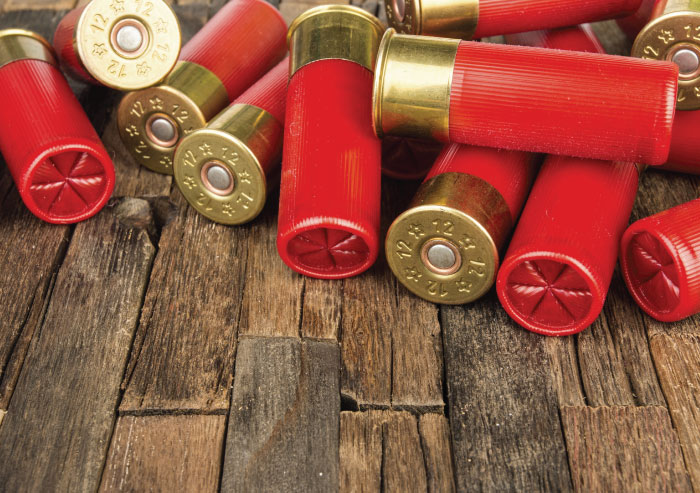 Picking the appropriate ammo is important for shotguns because there is a lot of variety and many different styles. Choosing the type of shotgun ammunition is important for the success of your intended application.

Buckshot, as the name implies, is great for hunting mid to large-size game like deer. It is also commonly used for self-defense purposes. There are different shot sizes within buckshot that describe the number and size of pellets, but just know that buck shot utilizes larger projectiles.

#4, 00 and 000 Buck are very effective on game like deer, coyotes and fox. They can also be a good option for home defense, depending on your environment and surroundings.

Birdshot is designed for hunting small game like ducks and birds. The shells hold many of these small projectiles that spread out at longer ranges. This allows shooters to be more accurate while hunting birds flying at a distance. However, birdshot is not good for defensive use.

#9, #8 and #7.5 are typically used for shooting clays. #6, #5 and #4 are great options for pheasants, ducks and rabbit. #3, #2 and #1 are good for longer-range waterfowl hunting because the larger pellets will retain their velocity better.

A slug is a single projectile that is loaded into the shotgun. Slugs have a large diameter and a lot of weight. They are great for shooting longer distances because you do not need to be concerned with spread, and they are effective against barriers.

Slugs can be used for hunting large game or specialized defensive use. Some slugs are meant to be used with rifled barrels so the projectile can properly stabilize, others are rifled themselves to stabilize in standard shotgun barrels.

Shotguns can also be loaded with less-lethal ammunition, such as beanbag rounds, rubber bullets and rock salt. These are primarily used by law enforcement and correctional officers, but can be used for personal defense if desired. Some people don’t feel comfortable with using lead ammunition for defensive use, and some don’t like the idea of using less-lethal, it’s just a personal choice.

Shotgun shells also come in different lengths from 2½, 2¾, 3 and 3½ inches depending on the gauge. The longer shells are capable of holding larger amounts of powder, giving them more power. Shotguns chambered for the longer length shells can fire shells of a shorter length, but not vice versa. If you have a shotgun that can chamber 3½-inch shells, it can fire all of the lengths. 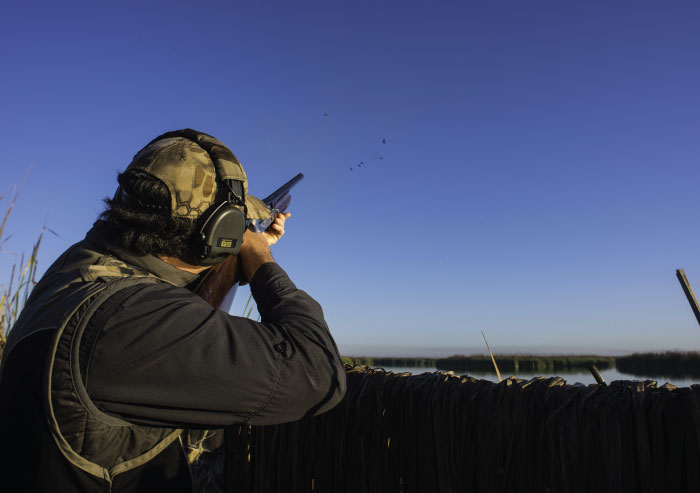 If you plan on using interchangeable chokes, make sure the shotgun you’re looking at has the ability to accept them. These chokes will usually screw on to threads at the end of the barrel. Some shotguns have a fixed choke that is incorporated into the barrel and is not able to be changed. 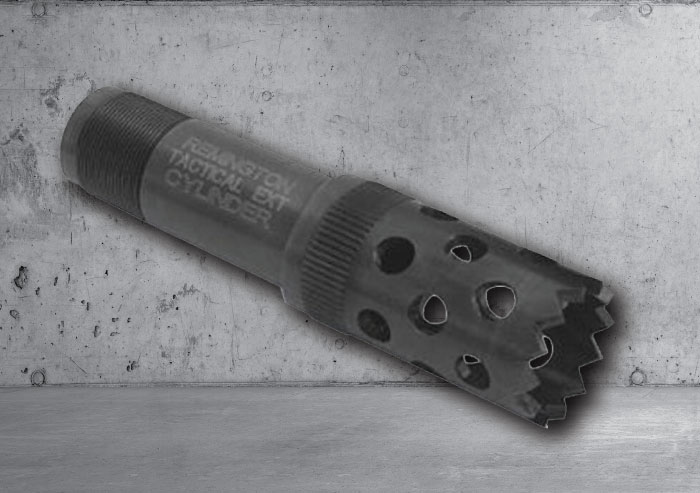 A side saddle, or shell carrier, is a useful accessory to have for your shotgun. They are great for adding quick access to more ammunition for defensive use.

Additionally, they allow you to have a different type of ammunition on hand for alternate uses. For instance, you could have your shotgun loaded with buckshot and have some slugs in the side saddle for barriers or longer-distance shooting. 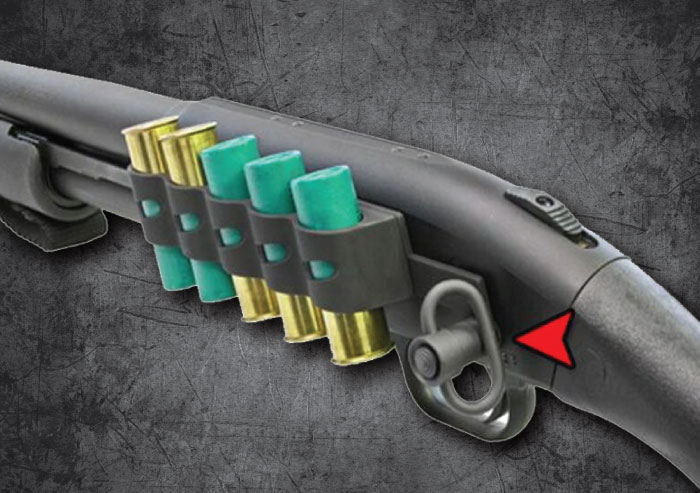 For shotguns that use a magazine tube, a mag tube extension is a solid upgrade. These devices screw on to the end of the magazine tube to provide additional length for storing more ammunition. They tend to come with a new spring that needs to be installed in conjunction with the extension to ensure reliable feeding.

Once you know what you’re looking for, finding the perfect shotgun becomes much easier. Just remember your purpose for buying as well as what features you desire, and try not to get lost in all of the other options. Having a good shotgun on hand is an incredibly versatile choice that is sure to help you out when you need it.