How to Pick Your First Rifle 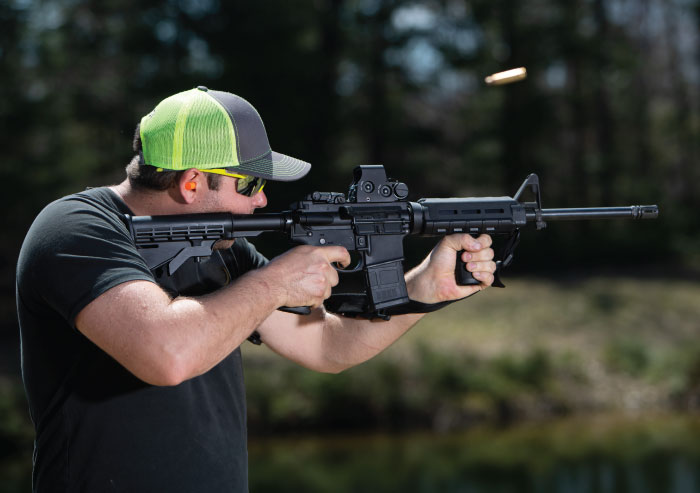 There are many kinds of rifles, and even more rifle calibers. Finding the right rifle for you depends on your budget, purpose, desired features (e.g. action, barrel length, etc.) and a variety of other factors.

The good thing is there are plenty of different rifles for different applications in every price range. Let’s cover your options for picking your first rifle.

When picking your first rifle, you first need to define your purpose. Will your rifle be used for hunting, target shooting or personal defense? Will it be used at close or long range? Once you decide how you want to use your first rifle, the choice becomes much easier.

It is possible to have a rifle for multiple applications and this may be the route to go if you plan on only owning one firearm. However, narrowing down your purpose can be a big help when selecting your first firearm.

(Not sure what we mean when we say “action?” Check out this dictionary of firearm terms.)

Semi-automatic rifles are primarily designed for defensive use. As the rifle fires, gas pressure from the firing cartridge causes the bolt to cycle, ejecting the spent casing and chambering a new round. They have the fastest firing rate and feed ammunition through a removable or internal magazine. Some semi-automatic rifles can be sensitive to kinds of ammunition depending on the amount of powder and bullet weight, so it’s important to test the ammo you plan on using in your specific rifle.

If you decide on a semi-auto, you may want to look at an AR-15. They’re the most popular type of semi-automatic rifle in the country and are a great option for many uses. They also tend to offer less felt recoil than other types of rifles because they have a spring designed to dampen the movement of the bolt. On other rifles, all recoil is sent straight down the stock into your shoulder.

Bolt-action rifles are incredibly accurate and are great for long-range shooting or hunting. They tend to use lower-capacity magazines that only hold a few rounds. Some incorporate detachable magazines, others use an internal box magazine.

These rifles are cycled by pulling back a bolt to eject the spent casing and pushing it forward to load in a new cartridge. Because of the sealed action that you cycle manually, bolt-action rifles tend to be great hosts for sound suppressors.

Lever-action rifles are the traditional cowboy guns of the old west. They are great for hunting and fun at the range. They even have their own branch of competitive shooting. Lever-action rifles can also be used for personal defense.

They are loaded and cycled by cranking a lever down to eject spent casings and back up to load a new cartridge. They feed ammunition through a tube magazine that runs under the barrel. These magazines are slower to reload but can be mastered through practice.

Pump-action rifles, also called slide-action, are not as common now as they used to be. These share a lot of characteristics with lever-action rifles in terms of application and operation, but the action is operated with a pump rather than a lever.

The pump is pulled back to eject spent casings and pushed forward to load in a new cartridge. They are great for hunting, but can also be used for defensive use in a pinch. The pump action is a very simple and reliable mechanism that will make it through most situations.

Break-action rifles are typically single-shot firearms made for target shooting, hunting or dispatching unwanted critters. They also come in multi-barrel variants and some chambered for multiple calibers, but these are less common. Break-action rifles can be found for an incredibly inexpensive price because they cost less to build.

This isn’t something that’s optimal for personal defense, but could do so in a pinch. After the gun is fired, simply push a switch to open the chamber. The rifle should begin to fold and you can remove empty casings and insert new cartridges, then snap the rifle shut to reengage the latch and you’re ready to fire again. 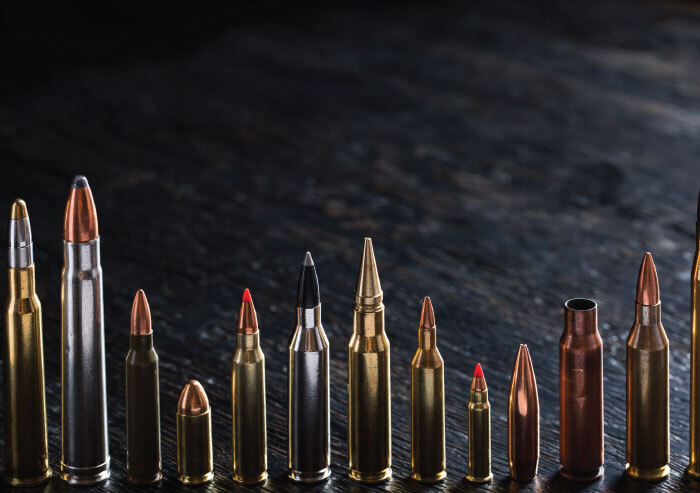 Once you have decided on your purpose and the action of your first rifle, it’s time to pick a caliber. There are tons of production calibers and a number of “wildcat” calibers for handloaders, but you should focus on something that is commonly available for your first rifle. Some common choices include:

There are also great options like .30-30 Winchester or .45-70 Government for lever guns. You can even get pistol-caliber carbines, which are rifles chambered in pistol calibers that provide modest recoil and are cheaper to shoot. Each caliber has its benefits and limitations so the cartridge you select should match your purpose.

Once you have determined your purpose and an appropriate caliber, you should select a barrel length for your rifle. There are optimal barrel lengths for certain calibers and applications.

It is important to do some research on the effect barrel length has on the caliber you select so that you can get what you need out of your rifle.

Depending on your purpose, the weight of your first rifle can be a concern. If you plan on carrying the rifle around you will want something relatively lightweight. This is useful for backpacking or hunting. If you just want to shoot small groups at a bench on the range, something heavy may be a better choice.

Just remember that the weight of the rifle will help soak up some recoil. A large caliber in a light rifle is going to give you more kick. 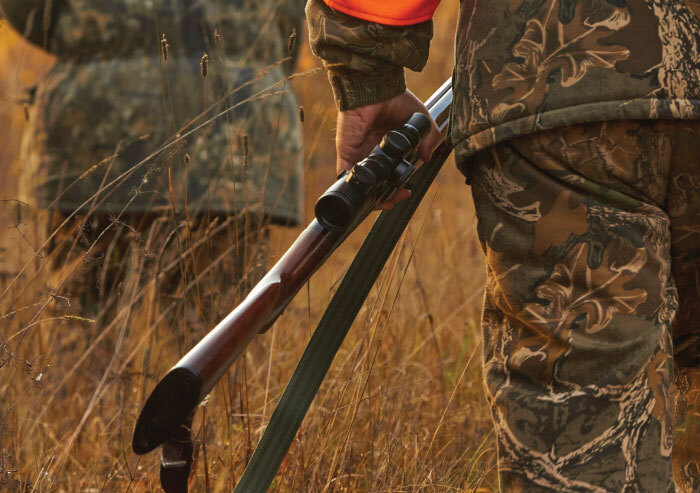 If you are buying your first rifle for personal defense, you will probably want to be able to attach lights, lasers and forward grips. Difficulty depends on the type of rifle you select. Some rifles come from the factory with rails or sections for mounting accessories, others require some alteration.

Firearms like the AR-15 can be easily changed, other older designs require some gunsmithing. For your first rifle, you may want to select something that comes equipped with mounting options from the factory and choosing an AR-15 is a huge help. There are more accessories for the AR-15 than any other gun on the market, and it’s an incredibly user-friendly platform for customization. 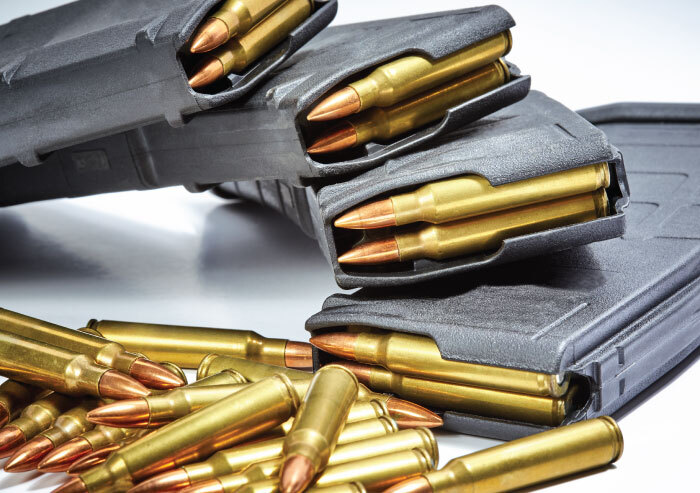 If the rifle you select uses detachable magazines, you may want to check how much spare mags cost. Some magazines are cheap and others are expensive, and depending on how many mags you want to stock up on, this may influence your choice for a first rifle.

Some rifles require more maintenance than others. For instance, the AK-47 is known for being incredibly low-maintenance. Additionally, some platforms are easier to take apart and clean than others.

A bolt or break-action rifle uses an incredibly simple mechanism to fire, making cleaning and lubrication a breeze. Some semi-automatic rifles are not so simple. That’s not to dissuade you from selecting something more difficult, most of that can be learned. Just know your limitations and do some research to know what you are getting yourself into.

If you want a rifle, chances are you’ll want to put an optic on it at some point. Some rifles don’t even come with iron sights and will require you to purchase sights or an optic from the start. There are many different kinds of optics, all suited to different applications. If the rifle is designed for long-range shooting, you’ll probably want a magnified scope, if it is for defensive use, you may want a red dot sight.

You can upgrade to these later, just make sure there are iron sights (usually a front post and rear ring you line up level) available. Regardless of your decision, if you want to add an optic to your rifle, you will want to be sure there is a proper way to mount it.

Many rifles will come with a Picatinny rail or be drilled and tapped for scope rings. (This means there are screw holes for installing a scope mount on the rifle.) A lot of this can be added later on by a gunsmith, but it is easier if your first rifle comes equipped from the factory.

Selecting your first rifle is a big decision with a lot of factors at play, but once you make some key choices, your options become clearer. The first step is to clarify what the rifle will be used for and the rest will fall into place as you work your way through this list. Buying your first rifle can be a big decision, so just make sure to do your research before you take the plunge.