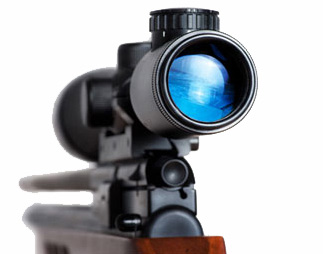 Select a scope term below to read more . . .

Coatings on lens surfaces reduce light loss and glare due to reflection for a brighter, higher-contrast image with reduced eyestrain. In addition, lens coatings can also prevent the glass from fogging and becoming scratched. Most coatings will lead to better light transmission giving you a brighter sight picture, but more coatings are not always better. The quality of the underlying glass will be the main determinant of how clear a picture is shown.

The ocular lens is the lens closest to your eye when looking through the scope.

Eye relief is the distance a scope can be held from your eye while still presenting the full field of view the scope is capable of producing. Choosing the proper scope is paramount to avoiding the dreaded “scope eye” (a cut from the eyepiece about where your eyebrow is), a close eye relief would be okay for rimfire rifles, but may be dangerous when put on a more powerful or magnum rifle.

Field of view is the side-to-side measurement of the circular viewing area at a given distance. A wide field of view makes it much easier to spot game and track moving targets. As a rule (with some exceptions), the higher the magnification, the narrower the field of view. 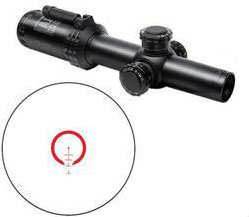 Using the typical 3-9x40 scope size as an example, would mean the scope has a variable power that ranges between three and nine times magnification of the unaided eye. For fixed power scopes the magnification power will be indicated by a single number before the “x”, for example, 4x40 would indicate a scope with a fixed four power scope.

Parallax is a condition that occurs when the reticle plane is not focused with the target. When parallax is present there is an apparent movement between the reticle and target if the shooter moves their head or, in extreme cases, will present as an out of focus image or reticle. Most non-adjustable centerfire rifle scopes are parallax free at 100 yards, rimfire and shotgun scopes will be set at 50 yards. If you might be shooting at distances of over 100 yards choosing a scope that has an adjustable parallax feature would be beneficial.

With so many different types of scopes available, it can be hard to select the right scope to fit your shooting purposes. Your specific firearm and how you intend to use it will determine the right scope for you.

At the core, a scope is a magnified ocular device to aid shooting accuracy. Scopes not only allow you a greater degree of precision as a result of the magnification, but also allow a shooter to dial in adjustments for wind and elevation to account for a bullet’s drop and drift.

A rifle scope is usually mounted directly over the receiver of the firearm with some unique features allowing a shooter to shoulder the rifle correctly and still acquire a proper sight picture. When shouldering the rifle a shooter’s face is very close to where the scope will be mounted a short eye relief of somewhere between 3" to 3.5" is required.

Rifle scopes are the most common style of scope and are found on everything from sniper rifles all the way to your grandfather’s old bolt-action rimfire.

To avoid the possibility of the infamous “scope-eye”, scope manufacturers have produced some longer eye relief scopes for the harder hitting rifles. These scopes are ideal for shotguns, muzzleloaders and large caliber rifles because they can be mounted a bit further forward than a standard rifle scope thanks to the 5" to 6 " of eye relief they allow.

The scout concept is the brainchild of the late, great Colonel Jeff Cooper, who believed there was a need for a general-purpose rifle that could be used for anything from hunting to fighting applications. The scout concept has become a favorite with shooters all over the world that need a light, fast and practical rifle.

Scout scopes , also called intermediate eye relief scopes, will have a moderately long eye relief of about 9" to 12". This allows the scope to be mounted forward of the receiver. Cooper stated he liked this configuration to allow the shooter to retain much of their peripheral vision, be able to acquire a sight picture quickly and take accurate shots on a man-sized target out to 450 meters.

Pistol scopes or long eye relief scopes have the longest eye relief of the bunch with 16" to 20" of eye relief. These scopes are very popular with handgun hunters and pistol marksmen. Some shooters will use a pistol scope as a scout scope because they are about half the cost of their purpose built cousins, but the eye relief is a bit long and can create some issues with quickly shouldering the rifle.

There are two basic types of measurements when it comes to scope adjustments, MOA and MIL. MOA stands for Minute of Angle, scopes with this measurement are normally offered with more precise adjustments than their MIL counterpart as a result of MOA's inch value being much smaller than MIL. One MOA is equal to 1/60th of a degree or 1.047" at 100 yards.

MIL (or MIL-dot) is short for milliradian. One milliradian is equal to 3.6" at 100 yards. The MIL system is popular with shooters that need to dial in adjustments for different distances, but the MOA system is very popular for shooters that are only going to be shooting at a fixed distance.