Our Low Price $35.98
Share
Send to Friend
Share Your List
Wishlist link has been copied
Brand: Buffalo Bore
MFR #: 34B/20
UPC: 651815034027
Item #: FC-651815034027
Description
Buffalo Bore manufactures some of the highest quality ammunition for both the hunter and for your own personal defense. Made in Montana, Buffalo Bore Ammunition delivers both in performance and selection. They use only premium grade components and materials to produce ammunition that you know you can count on. Buffalo Bore is field tested in real world "over the counter" guns, not test barrels. When you pull the trigger, know that you have the ammo that will do the job.

The introduction of a "heavy bullet for cartridge" 9X18 Makarov +P loading is the sole result of numerous customer requests. With millions of these pistols now on American soil and no +P heavy loadings available, this cartridge and the many pistol owners are suffering from the lack of serious fight stopping ammunition. This load is 20grs. heavier and 100 fps faster than standard 9X18 ammo. This loading features a flash suppressed powder, so if you need to shoot in low light, you won't be blinded by your own gunfire and this is a useful tactical advantage since around 95% of all civilian shootings in the US happen in low light while the criminal element is out and about. 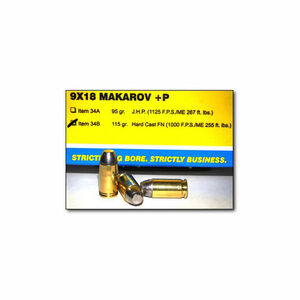